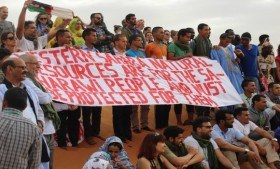 Brussels, Feb 22, 2018 (SPS) – The participants in the conference “trade unionists and solidarity with Western Sahara” organized Monday and Tuesday at the European Parliament in Brussels expressed their “deep concern” over the continuing plundering of Western Sahara’s natural resources, calling on EU and its institutions to “clearly condemn” any illegal exploitation of these resources.

The European deputies and international trade unionists who took part in this two-day meeting called on EU and its member States to exert pressure on Morocco to “stop the plundering of Western Sahara’s natural resources.”

They called on the Union’s member States and the non-governmental organizations to take an action so that the European Commission puts an end to these schemes aimed at including the Sahrawi products in EU-Morocco agreements, underlining that the decision of the Court of Justice of the European Union was clear” on this issue.

In this regard, they advised the European Commission to negotiate with the Frente POLISARIO on any future activity that includes Western Sahara and its resources.SPS