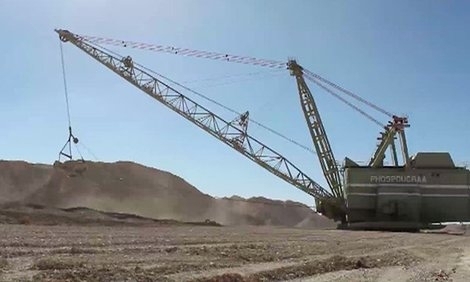 During an investor conference in Whistler, British Columbia, on 25 January, Chuck Magro, Nutrien’s President and CEO, told that the company has an intention to stop buying phosphate rock from Western Sahara. This was reported by Reuters.

However, Reuters did not report on the most interesting part of the news: the CEO informed that the contract between the Moroccan exporter OCP and the part of Nutrien that used to be called Agrium is ending now in 2018.

Nutrien emerged as a new Canadian company on the first week of January 2018, as a merger between PotashCorp and Agrium. According to WSRW’s calculations, the new company Nutrien is, by far, the biggest funder of the illegal occupation of the territory of Western Sahara. The company purchases half of the phosphate rock from Western Sahara. Since it began its imports in 2013, Agrium has imported around 27% of the phosphate rock that Morocco is excavating in the territory under occupation. This has a value of approximately 276 million USD, paid to the Moroccan government. Agrium was during these years the biggest importer from Western Sahara. This practice is now coming to an end.

The second biggest importer from 2012 to 2017 is PotashCorp, with 22% of the total puchases, at a value of 250 million USD. Western Sahara Resource Watch (WSRW) on 7 January 2018 wrote about the massive involvement of Nutrien.

The clarification from the Nutrien CEO last week that the current imports to PotashCorp contitutes “a little bit” is not correct.

The importing plant of PotasnCorp in Baton Rouge, Louisiana, imported last year phosphate worth 33 million USD. That equals approximately all the international humanitarian aid given to the Saharawi refugees (who owns the rock) last year. The Saharawi government has in 2017 taken the first legal actions against the players involved in the trade with Morocco over the phosphate rock. The Saharawis have not given permission to PotashCorp to purchase the phosphate rock from the government that is illegally occupying their territory.

Over the course of the last years, both Agrium and PotashCorp have been blacklisted by several dozen institutional investors due to matters of international law and human rights. It is expected that many investors during the first six months of 2018 will automatically apply the old Agrium/PotashCorp exclusion decisions on the new company Nutrien. The CEO of Nutrien acknowledged the pressure from the owners on the matter.

In addition to announcing the halt of imports directly into Canada, Mr. Magro told that the company will, in half a year from now, make a decision on what to do with the PotashCorp imports from the territory.

“While we welcome the intention of Nutrien to halt imports from the occupied territory, we are not convinced until we have seen the last vessel sail in to the harbours of Baton Rouge and Vancouver. The imports of PotashCorp is still massive, and still ongoing. Agrium had made the same promise of diversifying its supply chain to its owners for the last five years, but with effect only now in 2018. At the same time, PotashCorp has been in a state of denial. The people of Western Sahara cannot wait for Nutrien to stop at the same, slow pace to Baton Rouge as it has done to Vancouver”, chair of WSRW, Sylvia Valentin, stated.

Even if the Vancouver imports are halted, Nutrien would still be the second biggest purchaser in the world, due to its imports into Baton Rouge, USA, providing the trend from last year continues.

“While we welcome the decision to halt imports to Vancouver, we call on global investors who have already excluded one of the two companies to immediately apply their exclusions to Nutrien. Investors need to shy Nutrien until its role in the plunder has effectively stopped, and the last vessel has been shipped to the company”, Valentin said.

Already in a letter from Agrium to WSRW in April 2017, the company stated that it looks to other sources for its production in Redwater, Canada, imported via Vancouver.

On 10 January 2018, the General-Advocate of the EU underlined that EU and Morocco cannot include Western Sahara in a bilateral fisheries agreement, as Western Sahara is a separate territory from Morocco. He underlined that Western Sahara is under occupation, and that the international humanitarian law applies. The General-Advocate said that self-determination is a human right. Agrium and PotashCorp have never addressed that concern in their correspondence with WSRW, and the two have failed to seek or obtain consent from representatives of the Saharawi people.

Besides Nutrien, there are only three other companies globally that purchase from Western Sahara: an Indian subsidiary of the Moroccan exporting company, in addition to two farmer-owned cooperatives on New Zealand.

According to WSRW’s calculations, during the period from 1 January 2013 to 31 December 2017, Agrium and PotashCorp took in 75 of the 186 vessels carrying phosphate rock from the territory. These 75 vessels contained 4,54 million tonnes of rock, out of a total exported volume of 9,15 million tonnes. (SPS)